It is when your investment is little more than a can of paint!

The brilliant marketing tactic you are about to see is probably not something you can plug directly into your business. Unfortunately.

I am sharing it you for another reason altogether, which I will explain at the end.

I had to make a quick run to my local Target store this morning. For those of you who may not know, Target stores sell pretty much everything from food to clothes to electronics and housewares. Their logo is a big red bulls-eye and most of their stores have big red concrete balls around them to reinforce their brand.

Look what they are doing to a couple of them at my local store! 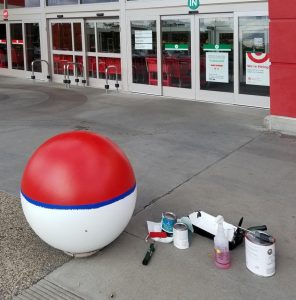 They’re turning them into Pokemon balls! Not all of them – just one in front of each entrance.

In case you live under a rock, Pokemon Go is going crazy. It seems like everybody is playing it.

Here’s what’s brilliant: Target already had these big red balls out in front of their stores. Alll they had to do to make it a Pokemon ball was paint the bottom half white, and put a circle on the front of it.

The ball in the pic is halfway done. The blue line around the middle is actually masking tape. This is not the finished product, but when is it done … just about everyone will recognize it for what it is and talkabout it.

What is the value to Target Corporation of people talking about Target? It is nearly incalculable. I’ll take a stab at it shortly.

What else is going to happen? Do you think some people are going to send photos of it to their family and friends? What is the value of that?

Will it generate enough buzz that they get some free press?  Get on the local news? Get in the paper that nobody reads anymore? You bet it will.

Now … the numbers …This section is not for everyone. If you like numbers,  you’ll love it. If you don’t like numbers, you’ll hate it.

If you read my stories for the ideas in them, just skip this part. The ideas you want are in the other paragraphs.

What I am about to do is kind of against the grain of what I am truly about. As an engineer and “numbers coach”, I like my numbers to be highly accurate. Yet, everything I am about to show you is a very rough estimate. So bear with me.

When I have to do a very rough estimate, which is quite often (and 100% of the time when making predictions like this) I always try to make the estimate work against me. In other words, if I am wrong, the error will be in my favor. I will make more than estimated. So when calculating ROI, I try to estimate high on the investment side and low on the return side. This will produce an estimated ROI which is very pessimistic.

I’m a pretty optimistic guy, but I don’t make business decisions based on optimistic numbers! That’s a fast track to the poorhouse.

I estimate the cost of a painter putting this design on two balls to be about US$ 500. Probably less. The point is I want to estimate my cost on the high side.

Target Corps’ annual net income is US$ 3.363 billion. I would imagine all the free press and buzz generated by this would pop up their gross revenue by at least 1%. A lot of the costs will remain the same regardless of this bump in gross revenue, so I would expect the net revenue to go up by morethan that. But in order to be very conservative estimating our return, let’s pretend that’s not the case. Let’s say the net revenue only goes up by 1%. That’s still a US$ 33.63 million increase!

If we take these two numbers and divide them:

That means that for every dollar invested, they should get $37.51 back.

That’s not ROI, though. We have to subtract out the investment to calculate ROI.

Let’s do it this way:

So there it is … over three thousand percent ROI. Approximately. Yet conservatively!

If they spend only $250 per store (half what we estimated), the ROI nearly doubles.

If they got a 2% increase in revenue (twice what we estimated), the ROI more than doubles!

These were a couple of the assumptions we made at the beginning.

Can you think of another assumption that I didn’t talk about yet?

If you haven’t, stop here and think about what we’ve done.

This is one way a person can really screw things up. By making assumptions that they don’t even think about.

I used annual revenue numbers. Should I have?

Is the impact of painting these balls really going to affect their income 12 months from now? Probably not as much as in the next 30 days. It will likely give them a big boost at the beginning, and the boost will diminish as the novelty wears off.

I actually think the numbers could go up more than 1% in the first year.

Will there be some residual impact  the second year? I think so. Some people may permanently change their buying habits. That has not been taken into consideration.

Point being, there are lots more variables to consider. Even a year from now, it will be just about impossible to measure the impact of painting the balls. If the income does go up 1% over the next 12 months, is that because of the Pokemon balls? Or other strategies?

It would be impossible to tell. Even if the impact is ten percent, if Walmart is successful in stealing some Target customers away, Target’s net revenue could go the other way!

Still, I have a lot of faith in the estimate.

In terms of rationalizing the decision to do a project, it is often useful to do a break-even analysis. This one is a no brainer. If one Target store generates an additional $500 profit ever as a result of the paint job, they’ve broken even. Considering (on average) each store does over a US$ 1 million in sales a day, that seems like a sure thing.

Now … how do you leverage something like this into your business? The key is to step back and see what is really going on. It is not about Pokemon Go. It is not about painting big red balls.

It’s about alchemy. Taking two things that are worthless by themselves and putting them together to create something new. Something of great value.

Spinning straw into gold. Rumpelstiltskining. Is that a word? It should be!

Paint by itself has almost no value. Pokemon Go surely didn’t have any value for Target Corporation. But by putting the two together, they’re creating something new … a buzz.

“Buzz” is incredibly valuable to a brand like Target, and incredibly hard to create — but they’re doing it with a paintbrush!

Hopefully that picture and the story that goes with it becomes really valuable to you. I hope it triggers a thought that triggers an action that triggers a nice deposit in your bank account. That’s alchemy.

What straw can you spin into gold?

What can you do that has a ridiculous ROI?

If this triggers an idea for you, I’d love to hear about it. Contact me to start the conversation.